The main event was finally upon us! It was time for our ten mile trek to Supai. An extension of the Grand Canyon, but outside the National Park, Supai is located on the Havasupai reservation. This was what I’d been waiting for: to finally conquer the trail that had defeated me a decade earlier.

We were up at the break of day to get to the Hilltop. The sun was barely starting to rise, and the morning air was crisp and chilly. I’m not a morning person, never have been, but I was so excited for the adventure ahead of us, that I practically leapt out of bed when our alarm went off. 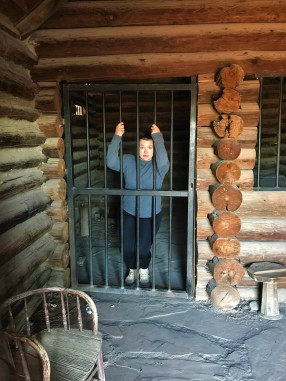 The four of us (Mary, Mark, Peter, and myself) stopped for breakfast (Mary and I having some shenanigans at the faux jail across the street before getting back in the car), then drove to the Hualapai Hilltop, where we met a group of Mark’s friends. There were eight of us total. Some of them knew each other, but we were mostly a motley crüe of random people, all connected through Uncle Mark.

Before we even bought our plane tickets Mary talked about wanting to ride a donkey. To hike with a donkey. To pet a donkey. To at least see a donkey. Despite repeatedly telling her they were horses and mules, not donkeys, and that they would not let her adopt one, she’d hear none of it. When we arrived at the hilltop the pack horses were

corralled near the parking area, and that was good enough for her. Mary, as giddy as a schoolgirl, asked one of the caretakers if she could pet one, and when he said “yes,” her face lit up like a Christmas tree. As she pet and talked to him like he was a precious unicorn, he let loose the longest, most powerful stream of urine I’ve ever seen. I think a little bit of the magic died for my Mare-Bear in that moment, but it sure was hilarious to watch her expression go from love and joy to “WTF,” while she stepped out of the pee-path. I could not stop laughing.

After some introductions and group pictures, we loaded on our gear and began our descent down the Havasupai Trail.

The trail is 8 miles from the hilltop to the village, and another two miles from the village to the campground. It begins with a series of switchbacks that drop 1200 feet over a mile and a half to the bottom of Havasu Canyon, and

follows the path of an old, dried up riverbed. The steep canyon walls rise up on either side of the often rocky trail, prickly pear cactus and other desert flora dotting the landscape.

There’s great benefit to starting this hike early in the morning. While it was chilly at the hilltop, the steep descent at the start of the trail means it gets very warm, very quickly, and there’s virtually no protection from the sun. It’s Arizona after all, so temperatures above 100 degrees are common, particularly in the summer months. But even late in October, we were feelin’ the heat.

Around the halfway point we regrouped for a rest and snack break at a spot where the canyon wall opens up along the ground, like a long, shallow cave. It’s the perfect place to stop, crawl under the cliff, and cool down.

As we got closer to the village, signs of the natural springs that feed the waterfalls began to appear. The landscape got greener, and as we entered the outskirts of Supai, the dry, desert sand gave way to crystal clear, turquoise creeks. Mary couldn’t believe such an oasis existed in the middle of such a desolate landscape. There’s something truly magical about hiking all day in the hot, desert sun, and coming upon the icy-cold, flowing creeks, and lush foliage surrounding the village.

“Can I touch it?” Mary asked as she pointed to the river, her face full of amazement. I laughed, both at her asking my permission, and because it’s exactly this enthusiasm for the little things that makes Mary who she is.

When we arrived at the campground there weren’t too many campsites left, but we managed to find a space large enough for our entire group. We got set up quickly, and Mary and I pulled out some protein bars and crackers for dinner. We were too tired to cook. 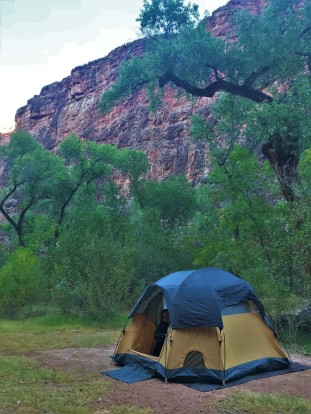 As the sun set, the temperature began dropping, and I was freezing. Just when I thought I would have to bust open a fourth hand-warmer, the strangest thing happened. An inexplicably warm breeze began to sweep through the canyon. It was like a giant space heater had been turned on. It reminded me of how it feels to walk through a warm spot in Lake Superior–except in this situation I wasn’t concerned that it may be due to someone’s pee. Crisis: averted. It felt like Mother Nature totally had my back.

I made the decision when I started this blog to remain apolitical in my stories. Social media has made it impossible to not know where everyone stands on everything. We look at Facebook and are bombarded by news, and the thoughts and opinions of everyone we know, on both sides of every issue. Everybody’s an expert, it seems, and I’m as guilty of that as the next guy. It’s on Facebook that I spew my opinions like someone actually asked to hear them (they didn’t).

In the 2016 US election, things got ugly. Suddenly, it felt like the entire world had lost its damn mind. Everyone was a “nasty woman,” or in a “basket of deplorables,” and the middle ground seemed to break open, creating a massive fissure between “us” and “them.”

With that being said, I had some nervousness about the trip. My family in Arizona falls squarely on one side of that divide, while I am passionately planted on the other, and if there’s one thing I’ve always been, it’s outspoken. I worried that discussions could get heated, I worried that the group of people my uncle invited (whom I presumed would align with him politically) would bring up an issue that I feel strongly about, and that I wouldn’t be able to hold my tongue. I worried my cursing would offend, I worried I’d make people uncomfortable when I busted out my cannabis. . . I worried.

Those fears turned out to be unnecessary. Apart from Peter, upon arriving at our campsite, jokingly gesturing towards the tents nearby and saying, “Have we met our neighbors? What do we know about them? Have we seen their voting records?” and me replying with, “Have you seen mine?” while my uncle gave Peter a, “please don’t get her started,” look, the subject of politics and current events never came up. We were just eight random people, all at different stages in life, all from different backgrounds, with different beliefs, and allegiances; united by our love of nature, hiking, and camping, and a desire to have a great time, in a beautiful place. The rest of it didn’t matter.

Unbeknownst to me, my uncle had informed everyone in our party that this trip was to celebrate my 40th birthday (and probably to not bring up politics). So while I thought our traveling companions were making dinner, they were actually doing something far more amazing: deep frying dough to make birthday donuts. These people, these complete strangers that I’d feared I wouldn’t mesh well with, had brought the dough, oil, cinnamon, sugar, and even a candle to help make my 40th birthday adventure even more special. They didn’t care what side of the political fence I sat on, and they reminded me that we’re not as different as the internet would have us believing.

After a round of Happy Birthday that literally left me speechless and tearful, we had what I believe to be the most delicious donuts I’ve ever eaten in all my life. I was absolutely blown away by their kindness and generosity of spirit.

We were all pretty tired, and we had another big day of hiking ahead of us, so everyone started hitting the sack fairly early. Mary and I headed back to our little campsite and smoked a bit before we went to bed. We talked about the day, and how excited we were for the next, and about what fantastic people we had hiked in with. 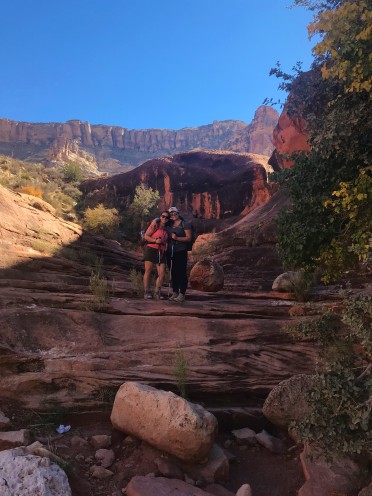 My 40th birthday trip was turning out exactly as I’d hoped. Every mile we hiked, the built up stress inside me faded away. By the time I went to bed I could feel the shift in my spirit, the shadow of negativity that creeps in through the grind of everyday life fading away; light and positivity filling its place.

When I’d hiked the trail in my twenties I had gone to sleep with feet full of blisters, and legs so sore I wasn’t sure I was going to be able to move the next day. This time I went to sleep blister-free, and bursting with excitement for the adventure to come: climbing down the canyon wall to Mooney Falls, and hiking on to Beaver Falls, the waterfall I hadn’t been able to reach the last time. I had no idea as I climbed into my sleeping bag that the hike would turn into an all day rescue for one of the incredible people who’d just made me birthday donuts.

Thank you for stopping in to check out my blog! Be sure to come back for LadycationSunday to see what befell one of us hikers, and how the tale unfolds!

Follow Ladycations to stay up to date on the latest trips, tips, and tales! Stay chill and keep hiking, my friends!

3 thoughts on “Conquering Havasu Canyon: The Trail That Once Conquered Me”