The day after my 40th birthday was going to be amazing. I’d traveled all the way from Cleveland to the Grand Canyon to turn 40 the right way: literally going “over the hill” at my favorite “hill” in the world. Having that adventure awaiting made getting out of bed at the ass-crack of dawn a little bit easier.

I was only slightly hung over when I woke up in the morning, which was surprising considering the astronomical amount of vodka and wine I’d had the night before. Between that and the fact that I was now in my 40’s, I sort of expected to wake up feeling like death (combating a killer headache, needing to vomit, questioning my life choices). What a pleasant surprise to only feel sort of shitty! 40 wasn’t looking too bad. 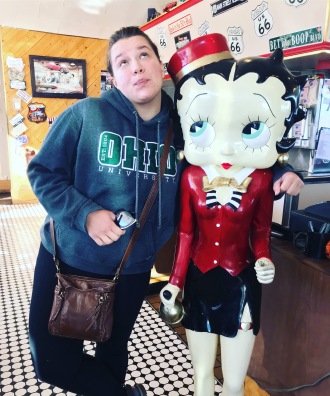 We had a big breakfast at a kitschy diner in Williams before we headed towards the National Park. I was so excited by the time we finally got there that I felt closer to 4 than 40. I was practically skipping across the parking lot, unable to fully contain myself, when I got out of the car. As we approached the rim, the magnitude and majesty of the Grand Canyon came into view. My breath caught in my throat and my heart skipped a beat; it was even more beautiful than I’d remembered. The enormity of the Grand Canyon is stupefying. It can’t be fully captured in photographs. There’s just no way to appreciate this tremendously massive place without seeing it for yourself. It’s impossible not to feel small when you’re staring out at a landscape so spectacular. I can’t emphasize enough how amazing it is, it’s awe inspiring.

Since Mary had never seen it before, I was almost as excited to see her reaction as I was to see it again for myself. She has such an energetic personality. I’m not sure if it’s her youth (she’s only 25), her seemingly endless optimism, or if she’s just more full of life than most people, but Mary has this incredible ability to make every situation fun, to turn the most mundane task into an adventure. Add to that the fact that she’s easily impressed, and I couldn’t wait to see her face when she saw the it for the first time.

There’s something interesting, and quite lovely, that happens to people when they’re at the Grand Canyon. It’s as if everyone understands its natural sanctity, knows it’s a place to be revered and respected. Everyone gets a little quiet, like they’re in church. So, instead of freaking out, Mary, like so many others, was speechless; but her expression spoke volumes.

After admiring the view, we walked towards the gift shop and purchased some prickly pear margarita mix before heading to the Bright Angel trailhead. Although we weren’t looking to get any serious mileage in, as we wanted to be fresh for our ten mile trek the following day, we did want to get our legs warmed up. We only hiked about 3/4 of a mile before deciding we were ready for lunch, taking a few pictures, and hiking back up to the top.

We got our over-priced hot dogs at the Visitor’s Center soda fountain and enjoyed the sunshine as we ate. There were plenty of other tourists roaming around, but despite the number of people, the area is so open that it never felt crowded. I’m sure that’s not always the case (especially in the summer months), but I was pleased that, on this particular day, it wasn’t too packed.

After finishing our lunch we decided to try out another trail on the South Rim, the South Kaibab trail. We moved our car and parked along the main drive, near the shuttle bus access road that leads to the trailhead, and began walking.

Though I’d done some serious backpacking in Washington only a couple months earlier, I wasn’t sure how well I’d fare on the switchbacks in the Canyon. Going uphill for that long, at that elevation, was intimidating. I didn’t want to hike too far down the trail and wear myself out for the next day’s big hike. 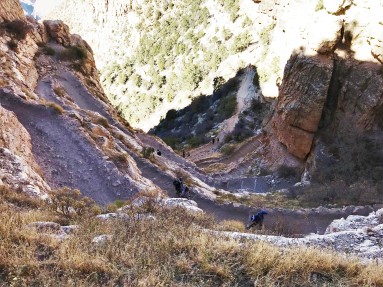 We hiked down to Ooh Aah Point which, as the name suggests, has one hell of a view. It’s a great spot to stop, catch your breath, and really appreciate your surroundings. Mark, however, being the Pro Grand Canyon Hiker that he is, wanted to get a few more miles in, so he kept going while Mary and I had a snack and smoke break at Ooh Aah. We chatted with some Australian tourists, drinking in their every word with those beautiful accents, and admired the breathtaking view, while we waited for Mark to return. 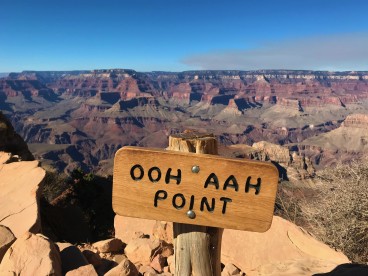 Once it was time to hike back up, I got serious. I took a long drink of water, a deep breath, and up we went. I’m not sure how far I’d gone when I realized I wasn’t struggling, but there was a moment when I thought, “I should be out of breath by now,” but I wasn’t. That’s when I really started to feel empowered. All the hard work I’d put in: running, yoga, new eating habits; a complete lifestyle change, had paid off. Mary wasn’t quite as in love with the uphill trek, and was going a bit slower. I was so grateful to Mark for staying with her so I could keep pushing. I couldn’t stop smiling! I was having the time of my life.

Getting to the top was a wonderful feeling. It made me more confident for the big hike in a few days. I was still a little nervous about a ten mile hike out of the canyon, but I knew I could do it. And even better, I knew it would test my limits, push me. I do love a challenge.

We went to refill our water, but were greeted by an elk who’d decided his thirst trumped ours. He was going to town on the leaky spigot, and was not about to move aside for some dumb, thirsty humans. We were sitting at a picnic table waiting out our long legged friend, when we were approached by a chatty teenager. I was instantly annoyed. He seemed to have either undiagnosed or untreated ADHD. He was all over the place, just being around him made me anxious.

The kid explained he was on a road trip with some friends from college, and that they’d wanted to hike further than he did, so he was waiting for them to come back. He wondered if he could hang out with us for a while. After he explained his situation, I kinda felt like an ass for being irritated by his very presence. This poor kid was alone, with no way of contacting his friends, and he was starting to freak out a little. I think he just wanted to be around a grownup. However, he was also very awkward and annoying, and I just wanted him to go away.

We planned on watching the sunset, but it was starting to cool down and we’d left our hoodies in the car. Although we felt bad leaving Mark alone with our new, chatty, young friend, Mary and I set off to return the trekking poles and retrieve some warmer clothes . . . and smoke a bowl, cause that kid, and all his nervous energy, was stressing us the hell out.

Walking along the access road seemed to be taking forever, so we decided to take a shortcut by cutting through the forest. We thought we had a pretty good sense of where the car was parked, so we took a diagonal path, and were feeling like a couple of trailblazing badasses, when we started to notice all the snake holes in the ground. Like, everywhere. Dozens of them–and we were in rattlesnake country. I thought I was going to completely lose my shit. We took off running like we were being chased by a swarm of angry bees, no longer caring where our car was, just wanting to get the hell out of there. We must’ve looked like a couple of lunatics, but I was not about to ruin what was left of my trip with a snakebite. Hell. No.

We emerged from the woods nowhere near our car. I’m not sure if that was due to our panic-stricken dash after realizing we’d wandered into downtown Snakeville, or if we just had no idea where we were going to begin with, but we had a bit more walking to do before reaching warm clothes and cannabis.

We stuck to the road on the way back to the rim (learning from one’s mistakes is so adulty, I was already good at being 40), and found Mark playing cards with Boy Awkward when we arrived. I had the thought, if we’re stuck with this kid for sunset, with him prattling on like that, when I just wanna find some freaking zen, I’m throwing his ass over the edge of this canyon. Obviously, I wouldn’t actually do that, but I was beyond relieved when his friends finally emerged from the trail, and we were off the hook (and no one would be arrested for murder: bonus).

The sunset was as breathtakingly beautiful as I imagined it would be. We sat and watched the shadows float over the canyons, as the sun sank below the horizon, setting the whole world aglow. It was so peaceful I felt like I could almost hear the sun going down, as if it was whispering goodnight.

With the sun went the heat. The temperature was dropping and we were chilly even in our hoodies. We walked back to our car, stopping so I could take pictures about a dozen times, along the access road as the crescent moon rose in the sky before us.

Once back in Williams, we hit up the Route 66 Diner (so. freaking. delicious.) with Mark’s newly arrived friend Peter, before heading back to the hotel to get a good night’s sleep. Morning would be upon us before we knew it, and with it came the big day: Hiking to Supai! 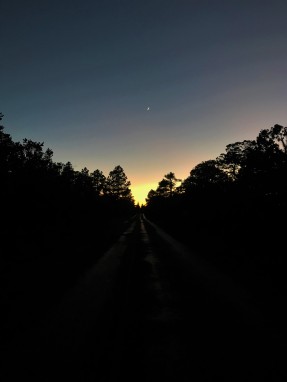 Thank you for stopping by! Be sure to come back for LadycationSunday when our Arizona adventure continues!

Follow Ladycations to stay up to date on the latest trips, tips, and tales. Stay chill and keep hiking, my friends.